Crossing Biscay is never a small undertaking. It is a notorious sea area, very open to large Atlantic swells and with steep underwater shelving, the sea can be turbulent at the best of times.

We were asked to assist the proud new owner of a beautiful new Lagoon 42 with the passage from Les Sables d’Olonne to Lisbon. At Halcyon Yachts we are very happy to carry out a yacht delivery with the owner on board. In fact, as part of our service, we offer sail training and certification. The owners were embarking on a new family adventure. With two young children, Aaron and Lara had sold up in Australia and moved on board yacht “Sabella” for an open-ended journey. Not knowing quite where the wind will end up blowing them is all part of the fun!

Just before setting out from Les Sable d’Olonne the weather was cold, windy and wet. The owners had unsurprisingly decided that the children should travel to Lisbon by aeroplane, and at age 1 and 3 this seemed very sensible. Biscay in February – I am sure Lara would have loved to have come along with us, but someone had to escort the kids!

On the morning of February 17th, there was a brief break in the weather. The rain has subsided and the winds were moderating. The weather forecast for Biscay looked reasonable and the decision was made to slip the lines. Three people were onboard, Captain Tim (one of our most experienced skippers and RYA Yachtmaster Instructor), First Mate Holly (also a skipper in her own right and a very useful person to have as First Mate) and the co-owner Aaron (student on this trip for the RYA Coastal Skipper Course). 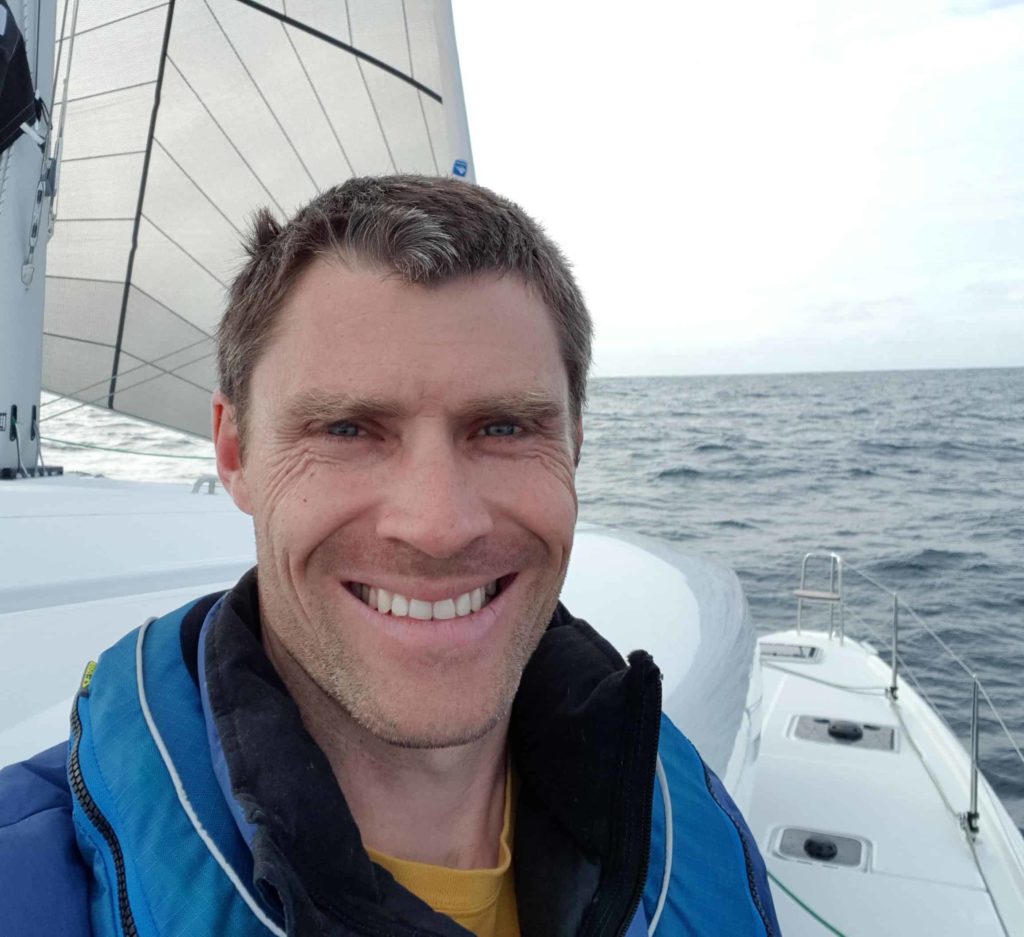 Within minutes of leaving the harbour, both Holly and Aaron came down with a serious case of Mal de Mer! The swell was pushing 3 metres and with the wind on the nose, it was choppy and unsettled. Captain Tim ended up standing a very long watch whilst the crew got their sea legs. The wind eventually veered and Sabella found a wonderful groove that resulted in an almost immediate transformation in the crew’s well-being.

Sailing southwest overnight with only the odd fishing boat for company, the wind gradually eased the next morning to a steady 12 to 14 knots. With a clearing sky, it was decided to break out the code zero. The speed increased from 5/6 knots to 7/8 knots. Smiles and happiness all around! 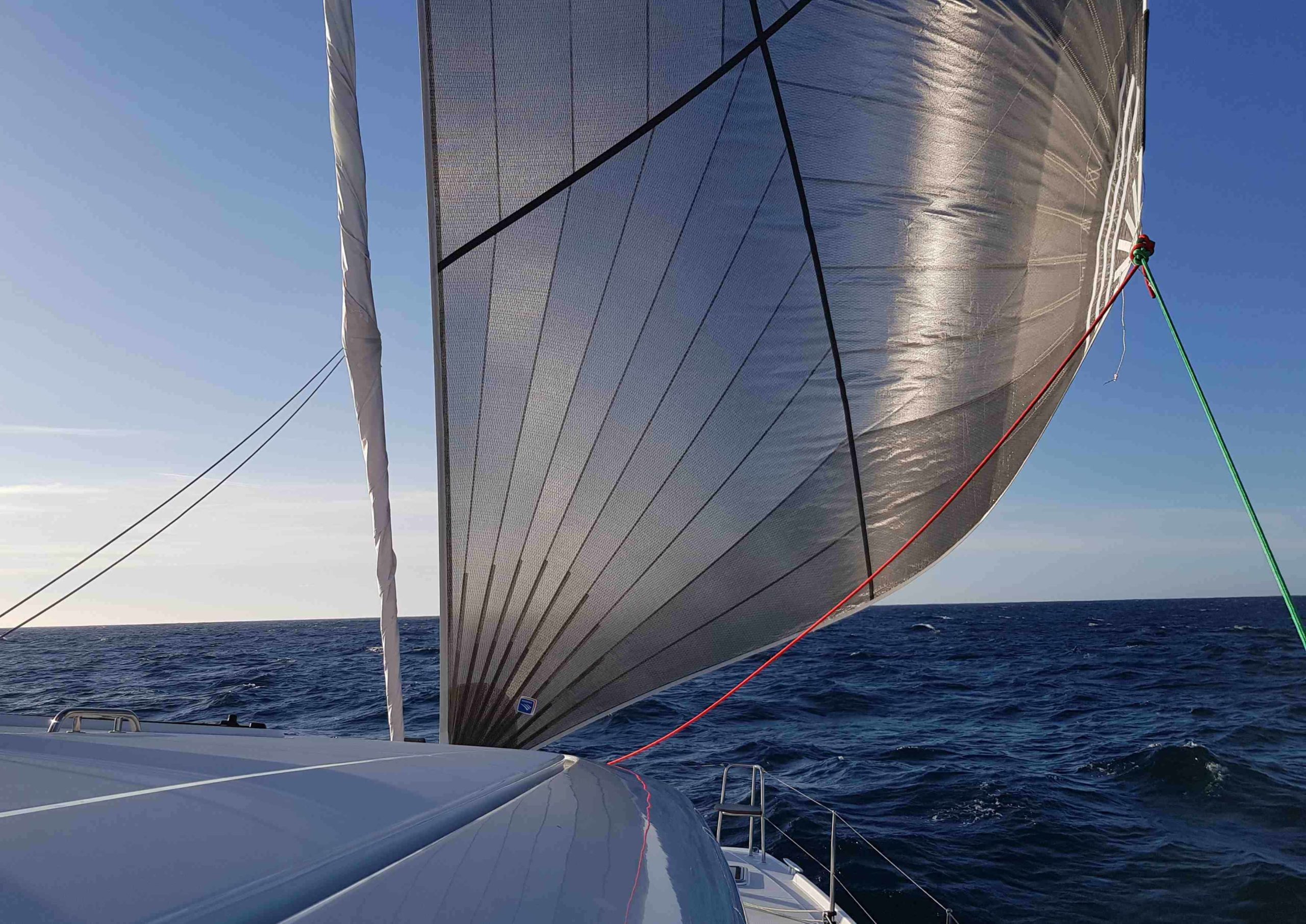 Land was sighted mid-morning on the third day and with the wind from the northeast the code zero was set again in 15 to 18 knots of wind, during the day the previously overcast sky cleared as we cruised about 10 miles off the coast of northern Spain. We had our first sight of dolphins as we left Biscay heading out into the Atlantic. The wind increased and as the day wore on we were surprised to find the wind at 20 knots gusting to 25. Sabella hadn’t missed a beat and the wind and waves pushed her along at speeds of 12 knots.

Reasonable winds overnight meant we were averaging over 8 knots. During the morning watch, the starry night turned into a beautiful sunny and warm day with winds steady from the NNE at about 15 knots. Perfect downwind sailing with the code zero! Dolphins seemed to appear every hour. There was also plenty of time for teaching and Aaron quickly absorbed the information we were giving him. Learning this way works incredibly well as you can immediately put into practice the things you are learning. The sunshine meant Holly actually took off her oilskins for the first time, although removing her hat was a step too far – we would have to wait until day five for that. 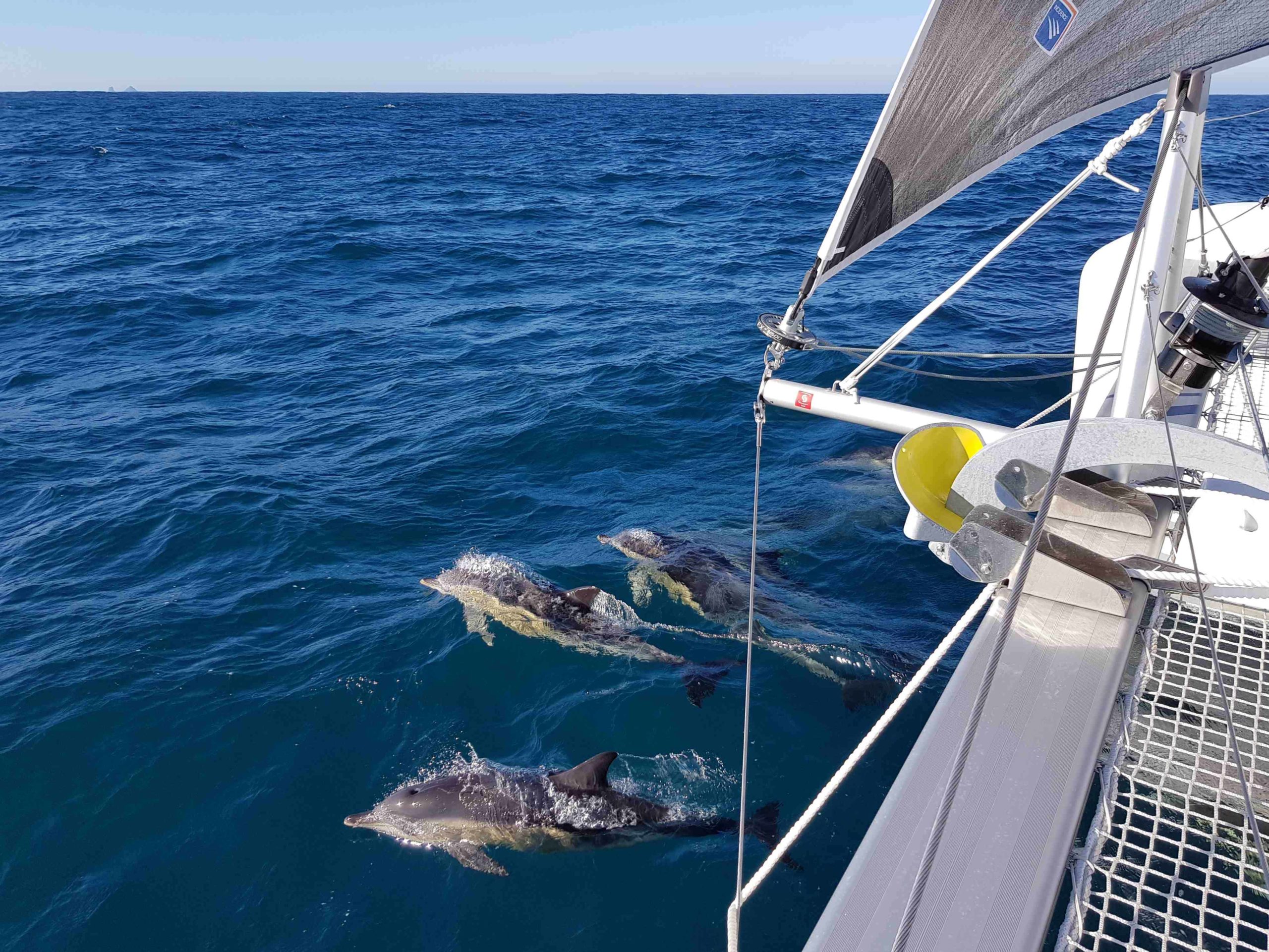 Day five (hat day) brought more sunshine and the perfect winds continued to blow from the North, dolphins were aplenty and the sea seemed to become bluer the further south we sailed. We approached Peniche at around 2pm, Aaron did a short pilotage exercise and some boat manoeuvres before we continued south, dodging the numerous fishing pots. We rounded Cabo Raso with an amazing sunset and as the wind gradually died, we motored the last few miles to our planned anchorage close to Cascais. Aaron and Holly prepared the anchor, we found our spot and dropped the hook. We were set well and enjoyed the lights of civilisation and some much-needed sleep.

We woke up to a gentle breeze and headed off towards Lisbon under motor, passing under the iconic Ponte 25 de Abril bridge under the watchful eye of the “Christ the King” monument. The entrance into Marina Expo is narrow and was a suitably difficult challenge for Aaron to undertake before being able to finally relax. He brought her through successfully, with just a little help from the tender that met us outside the entrance to guide us in. The rest of the day was spent boat handling around the marina, making sure that all elements of the RYA Coastal Skipper course had been completed. A great trip, fantastic crew and a fabulous yacht!

Here is the video of the yacht delivery:

To read more about the adventures of the Lagoon 42, “Sabella”, you can follow the owners’ blog: https://sabellasailing.com/

Halcyon Yachts Ltd is a dedicated international yacht delivery specialist with highly experienced and qualified crew. For more information or to see details of their recent deliveries please visit  https://halcyonyachts.com/